After a hefty helping of inspiration from blogger Dawn's Brain's series on Facebook pages that people need to stop sharing from, t...


Famously, last March, 2015 the WHO's International Agency for Research on Cancer came out with monograph volume 112 listing glyphosate as a class 2A carcinogen.

The GMO and Pesticide Cabal immediately shit their pants and went on a rampage trying to minimize and even 'debunk' the findings of the scientists at the IARC. Monsanto immediately released a statement in which they criticized the IARC findings and attempt to confuse the issue on the rankings.


"It’s important to put IARC’s classifications into perspective. IARC has classified numerous everyday items in Category 2 including coffee, cell phones, aloe vera extract and pickled vegetables, as well as professions such as a barber and fry cook."

As you can plainly see the rankings are based on evidence of carcinogenicity - not on how carcinogenic something is. It's not really accurate to compare different substances, even those in the same ranking - the mechanisms by which they cause cancer, and the risk they pose are going to be unique to each.

None of this is reason to dismiss the classification of glyphosate as probably carcinogenic to humans. Unlike the regulatory bodies who continue to approve use of glyphosate based herbicides, the IARC looked at the independent science, instead of relying on unpublished industry studies to base their conclusions on - which is precisely why their conclusions differ and should be taken seriously. Not only that, being that glyphosate herbicides are now so ubiquitous, and our exposures continue to increase, having concern over the long term effects of such a thing is quite rational. We need to continue to scrutinize the science behind this pervasive chemical. It is prudent to do so given the current evidence - as well as the lack thereof. And yet...

It is evident that the confusion over these rankings is being amplified by Skeptics. In particular, the blog of computer programmer Mark Alsip, named Bad Science Debunked stands out. Mark aims to point out the 'hypocrisy' of the $39 billion dollar organic market by targeting the usual punching bags like Food Babe and Dr. Mark Hyman. While they are public figures and should be used to all sorts of scrutiny from the Big s Skeptics by now, Mark takes things a step further by pointing the finger at small business owners for their supposed hypocrisy. 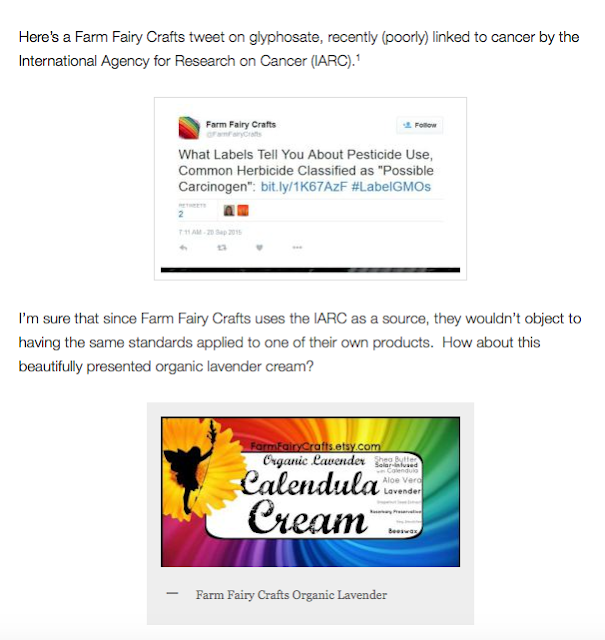 Apparently he got into a twitter conversation over one of his blogs about Vani Hari. This Etsy store owner and organic farmer got sassy with him so he decided to hold her to the same standard he applies to Vani.

Aside from the ridiculous statement about glyphosate being poorly linked to cancer, I noticed Mark makes a blunder about the substance being referred to in that tweet. It's about 2, 4-D - not about glyphosate. Regardless, he still uses that tweet to rationalize using glyphosate as a comparison to an ingredient in Farm Fairy Crafts organic lavender calendula cream to point out their 'hypocrisy'. The caffeic acid present in tiny amounts in their organic rosemary and grapefruit seed preservative is listed by the IARC in category 2B as the evidence is limited in animals, and no evidence was available for humans.

As mentioned before, comparing even two substances in the same category doesn't work to clarify anything. Bacon and cigarettes are both in category one. You can't compare those two things any more than you can compare a substance that is naturally occurring in plants and a synthetic herbicide. I am still trying to figure out how this inane comparison helps anyone to become more science literate.

Does it really make Farm Fairy Crafts hypocritical for selling organic lavender calendula cream and tweeting about the IARC classification of an herbicide? Heck no. I just took a spin around their Etsy site and Farm Fairy Crafts lists their ingredients and origins, their farming practices and pretty much anything you'd want to know about their products...meanwhile, Monsanto Company, creator of Roundup brand herbicide and Roundup Ready seeds has spent more than $22 million on blocking labeling of their herbicide treated crops in food products. If we are going to hold people to the same standards, why not apply it equally to Monsanto or any of the other companies selling pesticides and genetically engineered seeds? The criticisms are not only myopic, but also begin to wear especially thin as seen in our second example.

This gem of a piece on the small business owner Dr. Ena Valikov - a veterinarian who also happens to have a degree in biochemistry and be a very vocal critic of the anti-organic crowd - is unintentionally hilarious in that Mr. Alsip totally missed the joke Dr. Valikov was making here. Note the date on the post: 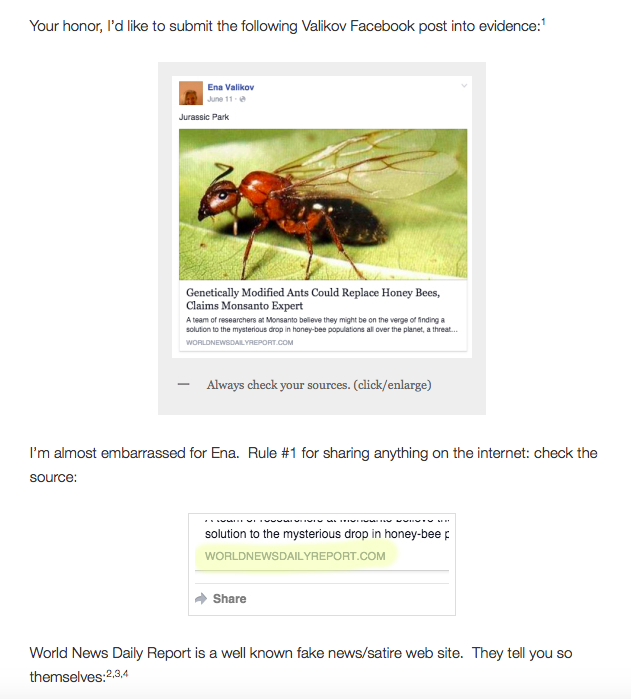 This just so happened to coincide with the release of the film Jurassic World. As IMDB describes it:

"A new theme park is built on the original site of Jurassic Park. Everything is going well until the park's newest attraction--a genetically modified giant stealth killing machine--escapes containment and goes on a killing spree."


Now go back and look at Ena's post. The only thing Dr. Valikov is guilty of here is making a joke. I'm imagining killer bee/ants, ant/bees (bants?) attacking people like the scene in Tommy Boy where the cops pull them over...and I'm laughing about it. Well, your firearms are useless against them.

So far what we've learned from from Bad Science Debunked is that Etsy store owners are not allowed to talk about IARC rankings and veterinarians are not allowed to make jokes. How this will contribute to a science literate society, I'm still not entirely sure, but thank goodness Mr. Alsip is there to guide us. And troll us... 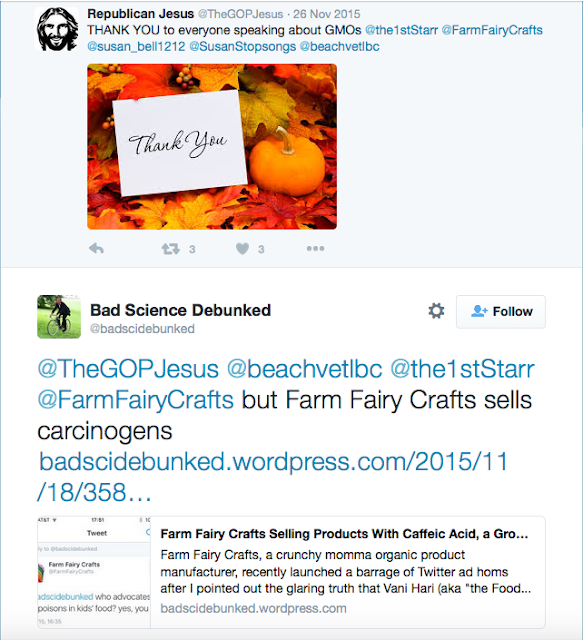 and deny he has a product... 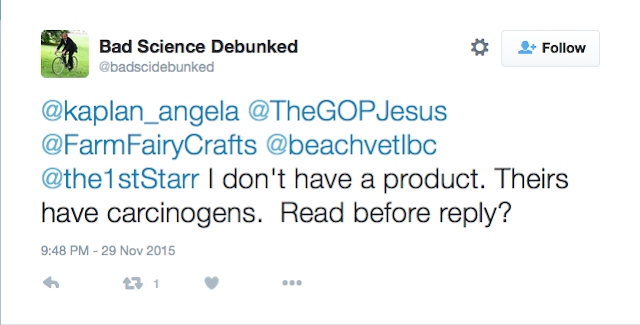 which probably has a chemical in it listed by the IARC...


...but the bants are swarming again and I have to go make sure my perimeter is secure.

Until next time, ladies and gents!


DISCLAIMER:
Before you get your panties in a wad: All images and image captures are used in strict compliance with Title 17 U.S.C. Section 107 of United States copyright law (commonly known as “fair use law”). This material is free to the public and is intended to provide commentary, critique, and entertainment.

DECLARATION OF COMPETING INTERESTS:
1. I have purchased a product from Farm Fairy Crafts for personal use and received samples of the aforementioned organic calendula cream, and you know what? It's fucking fantastic. 2. My pets are not patients of Dr. Valikov's clinic, but we do follow each other on twitter and for the record, I think she has a great sense of humor.

Posted by Vixen Valentino at 3:25 PM No comments: